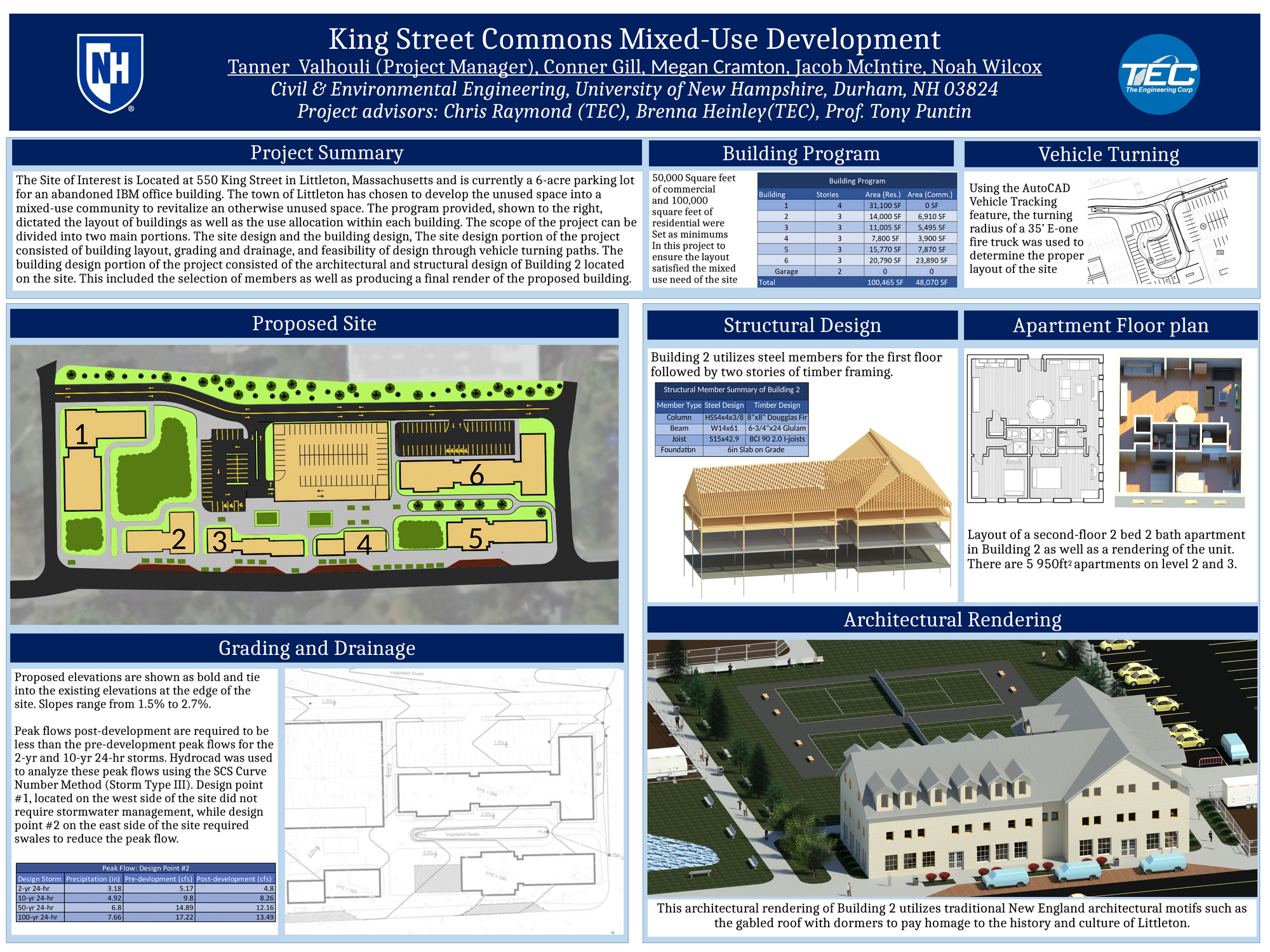 Located at 55 King Street, Littleton, Massachusetts, The king street commons mixed use development is a site design project aiming to bring new life to the Town of Littleton. The location was previously the site of a large IBM office complex with parking for over 3,000 employees. A 6 acre parking area along the southern facing side of the site has been designated as an area to be redeveloped under the Town of Littleton’s form based code for the special zoning district the property is located in. As American towns move away from the large shopping centers and malls of the past, there is a push to return to mixed-use style living that combines commercial and residential spaces. The form based code of Littleton sets out guidelines which were followed in this design to encourage traits like walkability, ease of navigation and classic New England aesthetics. The design put forward reflects the needs laid out as well as addressing the engineering requirements of a site this size, such as grading, stormwater and structural calculations. Designing a site layout was a collaborative effort between team members that saw countless iterations through a conceptual design process. Through this process, a selection of best alternatives was made to land on the current site design, which meets form based code requirements and building program requirements. Using the site layout as a roadmap, design in structural, traffic, grading and stormwater was conducted. Structural design is showcased in building number two of the site, with structural framing members selected and checked using current methods. To aid in the visualization of the structural analysis and the buildings on site, a model of building two was made in Revit and the software was utilized to produce a realistic rendering of the finished building and of the internal structure. Traffic design was carried out using the Vehicle Tracking feature in AutoCAD, allowing the designer to generate wheel paths through the site’s roadways of large emergency and delivery vehicles to ensure the site is accessible for safety and for function. The grading of the site was conducted using AutoCAD to generate contours and check them, and stormwater analysis was done in HydroCAD. It was crucial in the development to ensure that the post development runoff of the site was less than that of the pre-development runoff, guaranteeing the site would not produce extra stormwater that can be detrimental to abutters and town water management resources. The King Street Commons mixed use development has been designed to create a walkable, livable environment that will be able to sustain a modern lifestyle in Littleton, Massachusetts.